Please note that this content is no longer being updated. As a result, you may encounter broken links or information that may not be up-to-date. For more information contact us.

Lewis and Clark described what would become Idaho as “a sea of mountains.” And these mountains were the part of their journey that tested them most. In fact, the early snows of 1805 in the Bitterroot Range nearly defeated the Corps of Discovery.

Yet mountains steeped with snow, raging rivers and gaping canyons are all part of the rugged terrain of Idaho. And it is precisely this state’s challenging landscape that attracts today's new age of explorers.

Idaho is a land of imagination where you can leave the crowds behind and find yourself in a state of natural wonder.

Explores various geographic areas of Idaho and showcases scenic highlights in each.

The south central portion of Idaho contains some of the state’s highest mountains, including the Sawtooths, White Clouds, Seven Devils and Lemhis. And in the Lost River Range you’ll find Idaho’s tallest peak, Mount Borah. You can also find some of the state’s lowest elevations in this part of Idaho, at the bottom of Hells Canyon along the Snake River. The canyon is part of a national recreation area where white water rafters take on the state’s biggest rapids and jet boaters battle huge waves.

The contrast between high peaks and canyons is also displayed along the Nevada and Idaho border where the ten thousand foot peaks of the Jarbidge Range drop off into the canyons of the Jarbidge and Bruneau Rivers. These and other desert rivers like the Owyhee have carved an incredible system of canyons that cover much of this remote southwest corner of the state. Their waters have cut through the rhyolite and basalt lavas that were strewn across this lonely country during the blasts of ancient volcanoes.

While some rafters do venture into the Owhyee country, the Payette River system is a much more popular venue in this part of the state. The main Payette and its south and north branches all contain popular rafting runs. And Payette Lake further north is another great destination that attracts visitors all year round.

Idaho’s largest wild area lies just north of the Sawtooths, the Frank Church River of No Return Wilderness. It’s the largest forested wilderness is the lower forty-eight states and features the celebrated Middle Fork of the Salmon, the Main Salmon, and the Big Horn Crags.

Here in the southeast you’ll find the largest sea of sand in the state, the Saint Anthony Dunes. The dunes rise up to four hundred feet high. And there’s also the stark terrain of Craters of the Moon National Monument where lava flows covered the Snake River plain as recently as two thousand years ago.

In the far southeast corner of the state, straddling the Idaho and Utah border is beautiful Bear Lake. Calcium carbonate particles in the water help give the lake a unique turquoise hue. Also not far from the Utah border is City of Rocks National Reserve. Once visited by pioneers on the Oregon-California trail it’s now a mecca for rock climbers.

Further west, along the Snake River, are some amazing water displays. Thousand Springs State Park showcases one of the largest systems of springs in the world. The park contains a number of locations where springs flow from lava walls in gorgeous cascades. And up the river from the park, the state’s largest waterfall Shoshone Falls thunders into the Snake River canyon.

The lush landscape of North Idaho is the state’s lake country. It is home to Idaho’s inland seas, huge bodies of water whose basins were scoured and sculpted by glaciers. They are among the West’s most beautiful waters…Lake Coeur d’Alene, Priest Lake and Lake Pend Oreille, Idaho’s largest lake.

And it’s not just the lakes that give this green countryside a big splash of blue. Abundant rivers and streams flow over a kaleidoscope of terrains. They surge through forested mountains, narrow canyons and wide valleys.

In the far north the Kootenai River visits Idaho and returns to Canada. The Coeur d’Alene and St. Joe replenish the waters of Lake Coeur D’Alene. The Lochsa and the Selway merge to form the Clearwater River.

And just above the Clearwater are the rolling hills of the Palouse. In this area ancient winds carried and sculpted countless layers of fine soils to create an undulating landscape ideal for growing crops. 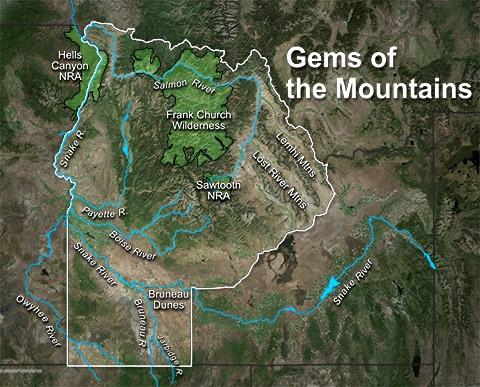 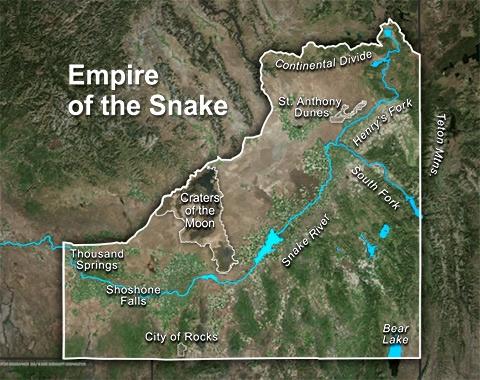 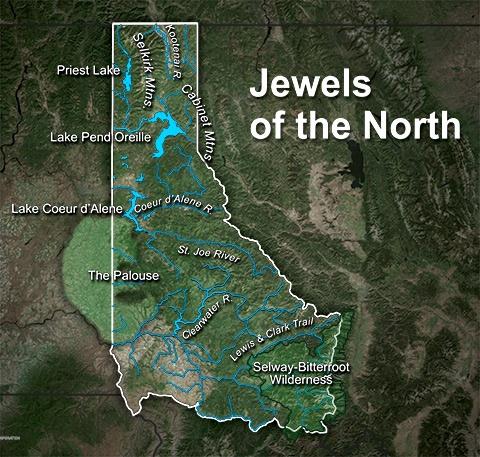